Consultations are available at:
You are here: > Maidstone Eye Practice > Macula > Diabetic Retinopathy

Long-standing diabetes mellitus damages the fine capillaries throughout the body which affects tissues such as the retina and kidney. Diabetic retinopathy affects the eye by causing new blood vessels to grow in areas of limited blood perfusion of the retina. This is called proliferative diabetic retinopathy and is more common in Type 1 disease. In Type 2 disease, the more common finding is leakage of fluid and fat into and under the retina (macular oedema).

Introduction
Diabetic Retinopathy is the leading cause of blindness in the working population.

How common is Diabetic Retinopathy?
Over 4% of men and 3% of women in England are known to have diabetes. Some degree of diabetic retinopathy is found in 39% of men and 35% of women with diagnosed diabetes. Although uncommon within 5 years of the onset of diabetes, approximately 90% of patients with diabetes will develop diabetic retinopathy within 15 years of the onset of diabetes.
Increasing obesity is likely to cause a marked increased in the number of patients with diabetes and by implication diabetic retinopathy, although the effects in the UK are likely to be dwarfed by the problem elseswhere in the world. The prevalence of diabetes globally is likely to increase from approximately 190 million people in 2003 to a projected 333 million in 2025 according to the International Diabetes Federation.

Types of Diabetic Retinopathy
Type 1
This used to be called childhood or “insulin-dependent” diabetes.  Because of destruction of the insulin producing cells of the pancreas, insulin is required to treat it.  It accounts for about  5%–10% of all patients with diabetes mellitus.
Type 2
This used to be called adult onset dabetes, but is increasingly found in younger adults and even in children. It is usually associated with obesity and occurs as a result of the bodies tissue becoming resistant to the effects of the insulin the body still produces.

Causes of poor vision in Diabetic Retinopathy
i) Ischaemia
Reduced blood supply to the macula.  A reduction in blood supply is similar to a heart attach or stroke and if it lasts for more than a few minutes, results in permanent reduction in vision.  This cannot be treated.
ii) Leakage
Fluid leakage causes the retina to thicken and not function so well.  This can be treated with laser photocoagulation or intravitreal injections of triamcinolone.  Leakage of fatty deposits into and under the retina can cause permanent loss of vision.
iii) New blood vessel formation
New blood vessels can bleed resulting in a vitreous haemorrhage, which can take months to resolve naturally.  Occasionally, vitreous haemorrhage can be “cut” out of the eye by means of a vitrectomy.  New blood vessels can also scar and contract, causing a tractional retinal detachment.
iv) Haemorrhage
Blood in the retina will stop light reaching the photoreceptor cells.  Blood will eventually disperse naturally, although the process can take several months.

What does my fundus look like?
Compared to a patient without DR, you are likely to have multiple red dots in the eye known as microaneurysms which can leak and reduce vision, haemorrhages on the surface of the eye, fatty depositis known as exudates in and beneath the retina and complexes of new blood vessels within the retina (intra-retinal new blood vessels).  In advanced disease, you may have new blood vessels on the optic disc and traction retinal detachments.  Here is a picture showing some of these features:- 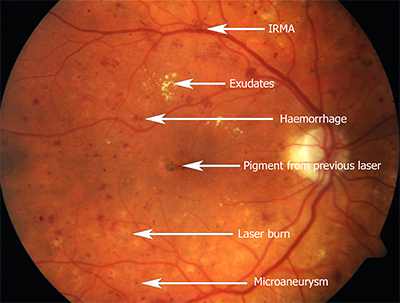 Here is the same patient examined with a fluorescein angiogram:- 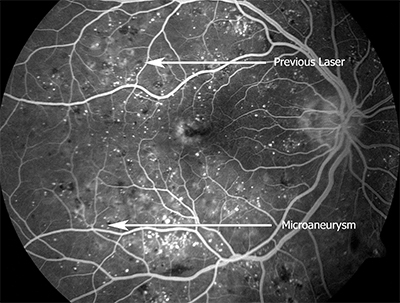