Consultations are available at:
You are here: > Maidstone Eye Practice > Cataracts > How are cataracts removed?

Surprisingly, lasers are not used to remove cataracts. Instead, a sophisticated form of ultrasound, known as phacoemulsification is used, in which sound energy is used to break up the lens into tiny pieces, allowing the fragments to be sucked up through a small tube placed into the eye through an equally small opening. The size of this opening, or incision, has slowly been getting smaller over the years, but it has to be large enough to implant a clear plastic lens into the eye to replace the optical power of the cataract lens removed. We also have to create an opening in the membrane around the lens (known as the anterior lens capsule), which is left in place to support the new plastic intraocular lens inserted into your eye. 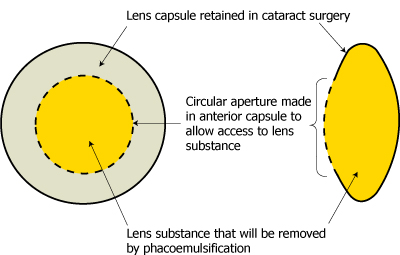 After a hole has been made in the capsule the lens substance can be removed by phacoemulsification:-

Now the intraocular lens can be inserted:-