Consultations are available at:
You are here: > Maidstone Eye Practice > A-Z of Eyes > Pseudoexfoliation syndrome

Introduction
Pseudoexfolation (PEX) is an age-related condition frequently associated with severe glaucoma and cataract. It is frequently asymmetric with one eye being much more affected than the other.

Diagnosis
It is diagnosed by finding deposits on ocular structures that line the internal surfaces of the eye, typically on the edge of the pupil and on the surface of the crystalline lens.

Epidemiology
PEX has been reported in 0.4% to 24% of the population over the age of 60. In clinical practice here in Kent, the prevalence appears to be in the lower part of this reported range. The condition is much more common in Baltic, Mediterranean and Arabian regions.

Pathology
The deposits consist of abnormal fibrillar extracelular material which is deposited in all anterior segment tissues and made by all epithelial (lens) and endothelial (trabecular, corneal and vascular) cells lining the anterior segment. The zone of zonular anchorage (pre-equatorial lens capsule) is particularly affected by these deposits, with subsequent weakening of the zonular insertions resulting in weakening of the support for the lens.  The following photographs demonstrate the presence of exfoliative material on the iris at the pupil margin and on the lens capsule. The iris rubs on the lens capsule and wipes of the exfoliative material between the undilated pupil margin and the peripheral anterior capsule. 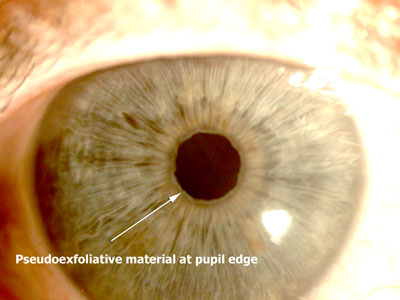 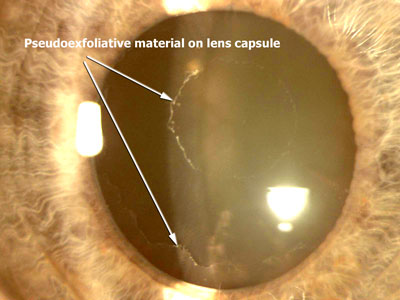 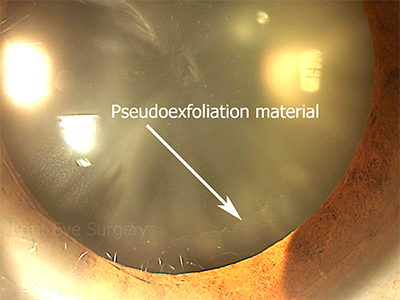 Complications
i) Cataracts
Cataract surgery in patients with PEX can be complicated by dislocation of the supporting structures for the crystalline, and subsequently implanted intraocular, lens. Other complications include breaks in the posterior capsule of the lens supporting structure with forward movement of the vitreous into the front part of the eye (vitreous loss), corneal endothelial decompensation (clouding of the cornea), postoperative inflammation and rises in intraocular pressure.

ii) Glaucoma
Intraocular pressure is raised in PEX because of increased resistance to aqueous outflow in the trabecular meshwork because of PEX material accumulation in the juxtacanalicular tissue near Schlemm’s canal (the drains of the eye).

PEX glaucoma is more difficult to treat clinically and is associated with higher mean intraocular pressure (IOP) and higher IOP spikes with consequent greater diurnal fluctuations in IOP. Pressure spikes are particularly apparent when lying flat on one’s face due to forward movement of the cyrstalline lens impairing aqueous drainage.  We believe that glaucomatous damage in PEX patients is more directly related to IOP than in POAG patients (as in Pigment Dispersion Syndrome). Measurements of IOP in PEX have to take account of the fact that central corneal thickness measurements in PEX are often lower in these patients. All patients with ocular hypertension and PEX should be treated with pressure lowering drops. Prostaglandin analogues such as latanaprost and travaprost have been shown to effect a better pressure lowering effect in these patients than betablockers such as timolol and may also result in reducing concentrations of pathogenetic factors such as TGF beta1, matrix metalloproteinase 2 and tissue inhibior of matrix metalloproteinase 2, thereby possibly conferring other long-term advantages.

iii) Systemic
There are early reports that PEX may lead to increased risks of heart attack, stroke and dementia. Not all studies have corroborated these findings however. Sensorineural hearing loss has been reported in patients with PEX, being present in 94% of patients with PEX compared with 70% of age-matched controls.