A drop in a persons immunity allows the reactivation of the varicella zoster virus that had lain dormant in the base of the brain many years after a chickenpox blister that had occured in the distribution of the ophthalmic division of the trigeminal nerve (forehead, upper eyelid, tip of the nose).

Many of the serious consequence of the condition can be reduced by i) early treatment with acyclovir, famciclovir or valaciclovir (with 3 days of the rash appearing) and ii) vaccination. Unfortunately, vaccination is not available on the NHS. Until the vaccine becomes available, exposure to chickenpox and early zoster can boost your innate immunity decreasing your risk of getting shingles.

Shingles 20% to 30% general population develop HZ during their lifetime (50% if one lives to 85). The peak occurrence of shingles occurs in patients between 50 and 59, but it is not infrequent in healthy young adults. An 85 year old has a 1% chance of developing HZ twice.

HZO This was first described by Hutchinson in 1865, an ophthalmologist working at Moorfields Eye Hospital (“A clinical report on herpes zoster frontalis ophthalmicus (shingles affecting the forehead and nose) Royal London Ophthalmic Hospital Report 1865;5:191). HZO occurs when the ophthalmic division of trigeminal nerve is affected. The nasociliary branch of the trigeminal nerve innervates anterior and posterior ethmoidal sinuses, the skin of both lids, the tip of nose, conjunctiva, sclera, cornea, iris and choroid.

Corneal manifestations Punctate epithelial erosions are common and are seen in  51% during the first week of ocular involvement. These represent viral replication with epithelial destruction and are precursors to the typical dendrite. The latter occur within a few days of onset of rash usually resolving within 4-6 days. They are slightly raised with only moderate fluorescein stain and are more superficial and heaped up than the dendrites seen in herpes simplex. They do not have “ terminal bulbs” seen with herpes simplex dendrites. Stromal keratitis 50% of patients with epithelial disease. This manifests as an infiltrate beneath epithelial keratitis and generally appears 1-3 weeks after the rash. Resolution results in anterior stromal scars. 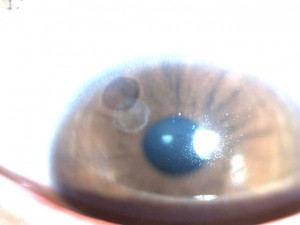 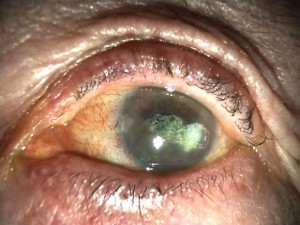 Peripheral ulceration is seen in association with deep stromal inflammation with oedema and infiltrate. Usually,  limbal vasculitis, scleritis and/or uveitis are present at the same time. It is always associated with neurotrophic keratitis and may resuit in corneal perforation. I treat these patients aggressively with oral steroids and oral acyclovir. 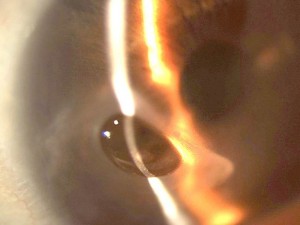 Corneal opacification The cornea may become opaque from any of the following: ground glass stromal haze, localized scars from previous stromal keratitis, lipid keratopathy or band keratopathy (calcification of the cornea).

Management of HZO Most patients require topical steroid, the use of which may be associated with a rise in intraocular pressure and cataract. Paradoxically, raised IOP may often respond to an increase in topical steroid because of a hypertensive uveitis which needs treatment. Most patients have compromised ocular surfaces and need preservative free and ideally phosphate free drops (to prevent calcification of the cornea). Microbial keratitis can be mis-diagnosed in patients taking topical steroids.

iii) in patients treated with aciclovir, adverse outcomes were associated with the delayed initiation of treatment (treatment started after 3 days of rash).